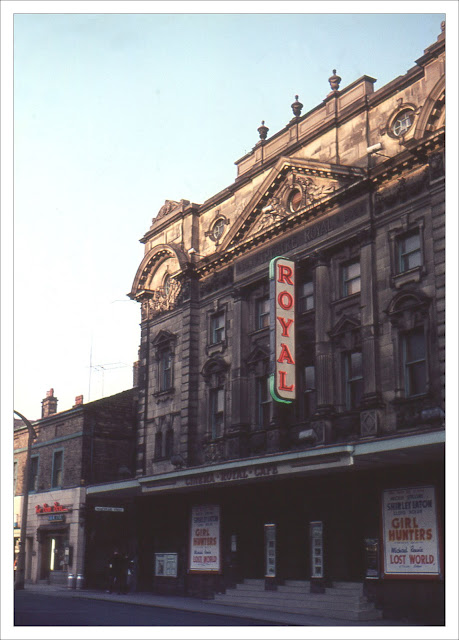 Another old transparency from my odds and ends box: unloved, unframed and, until today, unviewed. I suspect it is from the same film as the last two shots and therefore dates from the mid 1960s. The two films listed on the poster - Lost World and Girl Hunters ("Rough, Ripping, Raw" according to its poster) - were released in 1960 and 1963; but it always took films a year or two to descend to the Royal. The Theatre Royal in Halifax was built in 1905 and my picture capture it during its gradual decline from theatre to cinema to bingo hall to nightclub to abandonment.
Posted by Alan Burnett at 11:31
Email ThisBlogThis!Share to TwitterShare to FacebookShare to Pinterest

I'm pleased you found the box of odds and ends as the shots are really interesting. It's a real shame that such a wonderful building like this has been let go.

"Lost World" seems appropriate ! I remember seeing a movie there once......And later (sadly) as a nightclub.'Ended up a bit of a sleazy dump as a club.I remember being very drunk/it being very dark/& having the World's stickiest carpets!