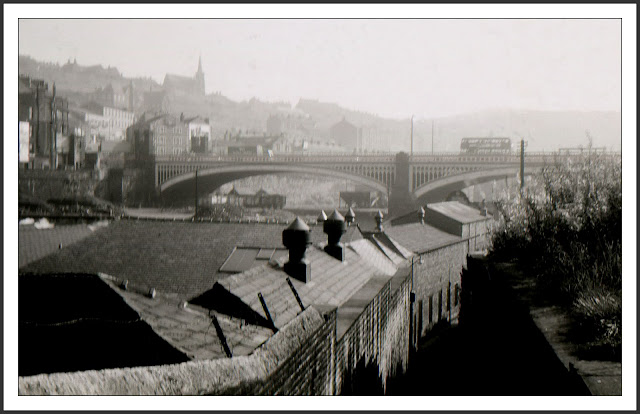 Back in the days when photographs were taken on 35mm film and to process them you soaked them in tanks of foul-smelling chemicals, I would cut them into strips of six negatives for storage. Often there would be an odd one or two negatives left over and I tended to throw these odds and ends into a little box. After thirty or forty years, I found that box the other day and I have decided to scan and feature some of these over the coming weeks. As these tiny negatives have been rattling around in an old cardboard box for thirty years, they a little worse for wear and I have tried to patch them up the best that I can. Today's picture features North Bridge in Halifax and must date back to the 1960s because many of the buildings on the left of the photograph were demolished to make way for the new fly-over in late sixties.
Posted by Alan Burnett at 10:58
Email ThisBlogThis!Share to TwitterShare to FacebookShare to Pinterest

Would that be a Leyland Titan PD2 crossing the bridge?

The term flyover is so unfamiliar. It must be a freeway right?
Great idea to restore some of the past .

I'm sure there will be some real treasure in the odds and ends box, what an archive!

That's a very nice picture, Alan, well composed, evocative. What a pity the houses on the left have been destroyed as any kind of a flyover would be bound to destroy the unity and coherence of the scene. We do mess up landscapes, don't we.