Around The World In 20 Memories - 12 : Tories In Paradise 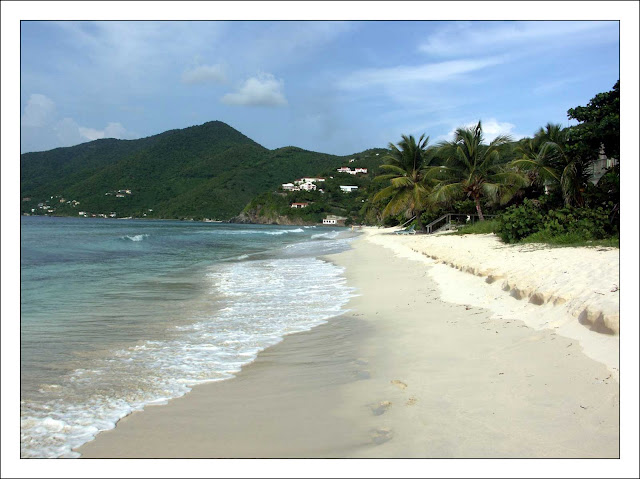 The picture shows one of those paradise beaches you can find all over the British Virgin Islands. The time is the early 1980s and the GLW and myself are visiting my brother and his family who were, at the time, living on the island. Not only is it paradise, but it is a paradise thousands of miles away from the world of my everyday life : quiet, isolated, remote. There is hardly another human being in site : just the sun, the blue sea and the occasional tropical bird. Seconds after I had taken this photograph a figure emerges, walking down the beach towards me. As he gets nearer I see a man wearing shorts and wearing a Panama hat. He strides up towards me, purposely, a practiced smile on his face, hand outstretched in greeting. "Donald Thompson", he says, "Tory MP for Calder Valley".
I never discovered what particular shaft of fate threw me together with my local Tory MP on a desert island thousands of miles from home. My brother, knowing well my aversion for all Tories, insisted on inviting him to various parties during the rest of my stay, but I managed to avoid him. But die-hard Tory and friend of Margaret Thatcher that he was, you have to admire the ability of a man who can spot a potential constituent thousands of miles from home and glad-hand him accordingly.
Posted by Alan Burnett at 07:24
Email ThisBlogThis!Share to TwitterShare to FacebookShare to Pinterest

It wasn't his island, was it? Expenses thing...

Enough to ruin a perfectly good holiday. I thought islands were to get away from those sort.

Forgetting politics the guy must have had some good taste to be on that island. It's one of these picture perfect places I've never visited and never will. Sad!

Of course you realize he was there so far from his constituency because he probably owns the place.

Not another human being on site either....Lovely!

How funny. I once met my dentist in an isolated garden in inland Portugal but your story's even better. Gorgeous beach - quintessential tropical beach scene.

Canada is having an election on Monday, May 2. Guess I better not vote "Tory", tee hee hee.