All Mixed Up On The Roof 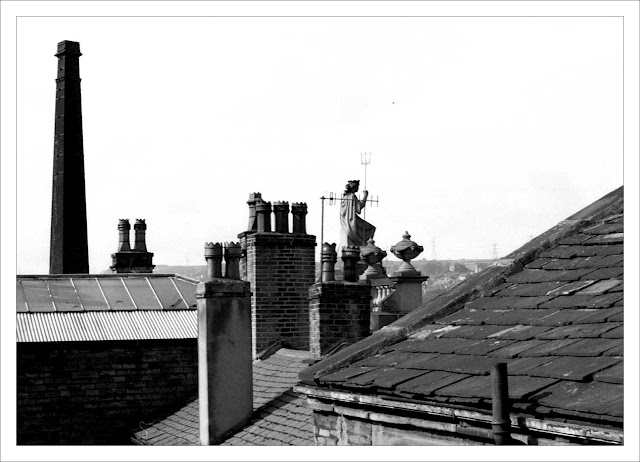 This is a picture I took during the 1970s and shows the roof-line of Briggate in Elland. The rather striking figure of Britannia sits on top of what was originally the Elland branch of the Huddersfield and Halifax Bank, These rather superior looking bank premises were erected in 1895 and are flanked by two older, but less glamorous, pubs : the Malt Shovel and the Bridge Inn. But at roof level all the bits get nicely mixed up.
Posted by Alan Burnett at 09:17
Email ThisBlogThis!Share to TwitterShare to FacebookShare to Pinterest

Is she still up there? I like the array of chimney stacks, they make a good picture.

She was still there last time I checked Val. I will walk Amy around that way in the days to come and get a photo of what is a pub sandwich.

You could have written such a great poem for "The Malt Shovel"!

Wonderful! That could in many ways be anywhere hereabouts - then you do a double-take and notice Britannia!