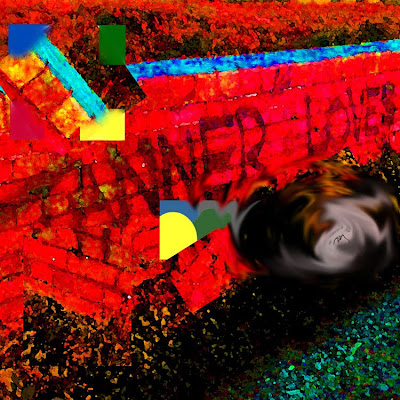 I landed myself with this stupid challenge yesterday on my News From Nowhere Blog. I promised that the next six Sundays would be "Surreal Sunday" during the course of which I would publish five illustrations from the catalogue of the British Surrealism Exhibition I went to see the other day along with one fake I had produced myself. The challenge for everyone else would be to spot the fake. The challenge for me would be to produce it. And then today, the admirable Chairman Bill was complaining about some graffiti which had appeared on his wall and commented "Artistic Merit - Zero". This got me thinking. I pinched his image and messed about with it. This will not be the fake I inject into the Surreal Sunday series, but it was fun having a practice.
Posted by Alan Burnett at 09:41
Email ThisBlogThis!Share to TwitterShare to FacebookShare to Pinterest

I get the feeling that we may share views on modern art (some of it). Of course, your wonderful effort is excluded:-)

Normal Rockwell once told me to stick to realism because everyone can understand it.

I was working like he was for magazines at the time and Pollock came out with his dribbled paint pieces, as I recall, and I must have asked him what he thought about me switching to modern illustration.

It limits the market in magazine illustration. I assume the same applies to art.

Thanks for visiting and helping me to make history.
Pick a Peck of Pixels

I like all that red. It seems very surreal to me. I like some of it but not a lot of it. Salvador Dali liked making money from it and admitted he was taking advantage of his public.