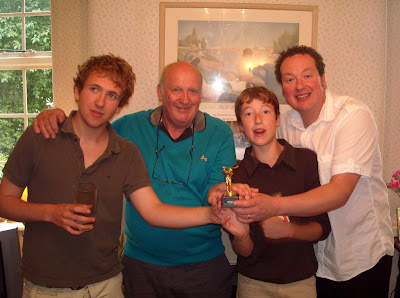 Family party this weekend - hence the posting pause - and during the party the presentation of the Rhoda Cuthill Memorial Trophy took place. The newly introduced trophy is the prize in a golf competition played between members of the family. The winner was, appropriately enough, Dave Cuthill (2nd from the left) Rhoda's son. The other players pictured above are from the left Alexander Burnett (3rd), Zac Garforth (4th), and Lee Garforth (2nd). These were the only four peoples who played. Family members who would have posed a competitive threat to this cabal were sent to another golf course and those who don't know one end of a golf stick from the other were just not invited. Needless to say I fell into the latter category.
Posted by Alan Burnett at 08:06
Email ThisBlogThis!Share to TwitterShare to FacebookShare to Pinterest

Alan, that's an interesting idea to have a trophy for family members. Will it always be so or will outsides be allowed to infiltrate?

Don't feel badly, it will one less thing to dust!
Sunny :)

I thought I was here once this morning and left a comment. If not, I am back. lol.

I am sure I was, so you are more than welcome to delete this comment.

The Retired One said...

I noticed the trophy is verrrry small...hope that is not an indication of anything else male in the family. hahahahaaaaaa......