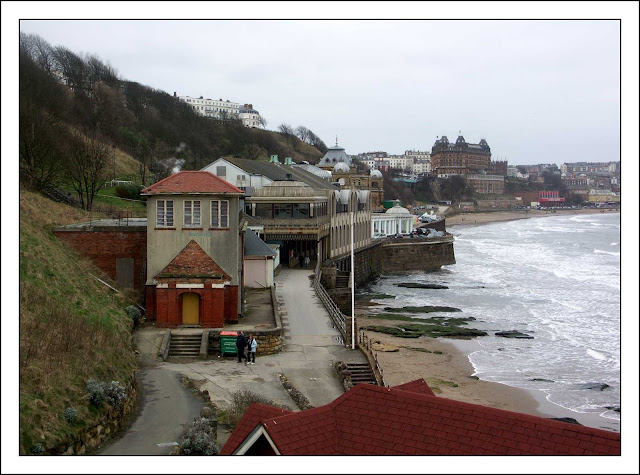 Looking at the Spa Theatre complex (currently being redeveloped) towards the centre of Scarborough. The fine building in the middle distance is the magnificent Grand Hotel which was built in 1867. It was supposedly designed around the theme of time, with four towers representing the seasons, 12 floors representing the months, 52 chimneys representing the weeks, and 365 bedrooms representing the days. From above it displays a V shape : in honour of Queen Victoria. I have mentioned the hotel before in a News From Nowhere post and looking back at that I realise that, by chance, I have almost taken the same shot as in the 1913 postcard mentioned in that post. 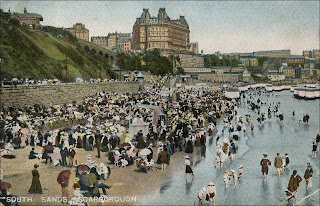 Posted by Alan Burnett at 11:18
Email ThisBlogThis!Share to TwitterShare to FacebookShare to Pinterest

Quite a theme for a hotel, unusual too. I wonder if the original granduer was removed when it was redesigned.

Your picture is on show on A Mixed Bag today

What a lovely scene. I'll be interested to see it when the renovations are complete! The beach would be quite chilly today, wouldn't it?

I have that lovely Beatles song running through my head...Scarborough Fair...

Does the hotel have a leap year room that's only opened once every 4 years?

Betsy, that was Simon & Garfunkel, not the Beatles, who did "Scarborough Fair".

What an interesting theme for a hotel.
It certainly is a grand view!
Have a delightful weekend.
☼ Sunny

Grand View indeed! Thank you for the explanation of the theme! Wow, someone was ambitious. (I love Chairman Bill's comment LOL) The postcard is precious. I have postcards from Yellowstone in1914 - 1916 that I I will be posting about soon...

What a grand picture indeed, I like all the colors and texture of the buildings.

A very grand place, Alan, and the Grand Hotal seems like a wonderful old place. Do you have any photo of it close-up?

It looks like the theatre wasn't there in the 1913 picture. A very interesting post. ( not the one in the photo silly!) Thanks!

I see that the beach was crowded even back then.

That is an amazing photo adn I ahve to say I like it better than the od postcard's.

Far Side of Fifty said...

Well I think you should go for tea someday and take your camera..it is such an elegant looking building:)