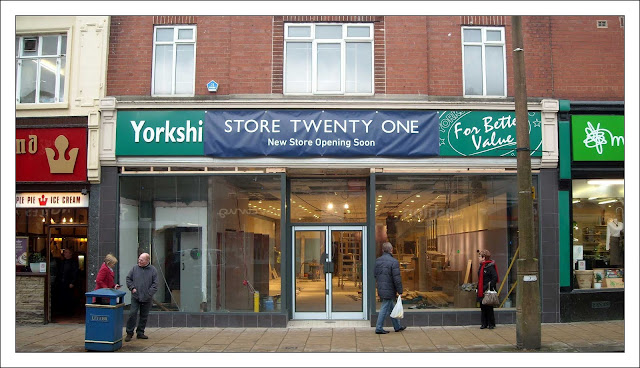 My week is almost at an end. We are in Brighouse again and looking at a storefront that originally was the local Woolworth store but a few years ago became the Yorkshire Discount Store (a.k.a. Woolworth's without the Pension Fund). In its' turn that is currently undergoing metamorphosis into something called Store Twenty One. Brighouse is in the heart of the British textile belt. Two hundred years ago cotton would be imported from places like India, transformed into textiles and then sold back to the Indians. There is something mildly appropriate about the fact that the new store is owned by an Indian company which specialises in selling Indian cotton goods to the British.
By next week Store Twenty One might have become something else (Store Twenty Two, perhaps) but hopefully I will not need to tell you about it. My current shopping odyssey is drawing to a close and the GLW is about to return to work : until May, at least, when she is due to retire. I don't suppose there is any chance that the Government might rapidly increase the retirement age?
Posted by Alan Burnett at 11:13
Email ThisBlogThis!Share to TwitterShare to FacebookShare to Pinterest

Having doubts about Yorkshire now. The shop on the left appears to be selling People Pie & Ice Cream.

Well you certainly had a busy shopping week! I have really enjoyed looking at all the shops, and I didn't spend any money!
Have a delightful weekend.
☼ Sunny

It is good to see you are surviving it all. Woolworth's left us a long time ago. We have so many copies of it I don't know which ones followed. Get some rest over the weekend.

Shipley's ex-Woolworth's became a Store Twenty One as well. I bought a nightie there... it shrank in the first wash. It's what they used to call 'baby-doll' now. Unfortunately I'm not.

We hope the retirement pension will rise rapidly by May. When I retired the pay went up 23% the very next day. Just like the shares I sell....It is not people pie but apple pie you know that.... A good photo depicting change Alan. Look out, when the GLW retires she will expect breakfast in bed....

Not People Pie, Michael? It is Yorkshire, you know!

Well hubby doesn't want to retire so he brings me tea n porridge every morning before he leaves just so I keep smiling. And it's working. He's 71 today. Changes that you depict are everywhere and they are happening faster all the time. Good to have a photo record of it.

I didn't like Woolworths so was glad when it went. Shopping spree ended? Oh well, I enjoyed it while it lasted.

I like window shopping, just look and don't buy. I do a little sewing, so I look at the fine details on the clothing for ideas.